The History, Science and Poetry of New England’s Stone Walls, by John-Manuel Andriote for earthmagazine.org

(I do NOT receive any compensation for items bought through the links in this piece. My words are below in italics; the rest of this blog are the words of John-Manuel Andriote.)

The cover photo for this post is one I took recently, on my daily woods walk–of an unassuming rock wall, in the middle of nowhere. (BTW–My dog is looking at a squirrel; he does NOT share my affinity for rock walls.) Among the many things that awe me, one is an old New England rock wall; I know enough about the history to make them awe-inspiring, so I wanted to share that knowledge with you. I love this piece written by Andriote, because he makes an adventure out of it, which, as you know, I’m all about:) When I see an old, dilapidated rock wall, like in the cover photo, I always wonder about the people who constructed it, and how old it is.

In 2007, I returned to eastern Connecticut, where I grew up. Driving north on Interstate 395 past towns like Norwich and Griswold, I was struck by the many old gray stone walls tumbling off into the forests along the highway. Realizing that the trees in those forests weren’t particularly old, I surmised that those forests had once been cleared farm lands.

Casually wondering what had happened to the farms led to a journey of discovery through the forests and fields of New England.

My journey started with the book “Stone by Stone: The Magnificent History of New England’s Stone Walls” by University of Connecticut geology professor Robert M. Thorson. Thorson — known to colleagues and friends as “Thor” — says he was “smitten” by the stone walls after moving his family from Alaska to Connecticut in 1984. At first, studying them was just a hobby for Thorson. “It wasn’t my job,” he says. “I had been teaching and researching. I ran a lab with graduate students and had funded projects … But I got interested in these stone walls as landforms, so I kept working on it.”

In 2002, Thorson published “Stone by Stone,” his first book on the topic, and he and his wife Kristine founded the Stone Wall Initiative in conjunction with the publication, which Thorson describes as the first geoarchaeological study of New England’s stone walls.

Like the book, the Initiative aims to promote scientific understanding of the walls and advocate for their protection as cultural and ecological resources. Since the book’s launch, Thorson has spoken to thousands of stone wall enthusiasts, authored numerous articles on the subject, and seen his book become the basis of a documentary called “Passages of Time.”

On a brilliant afternoon in January 2014, I joined Thorson for a guided tour of the stone walls in Brooklyn, Conn. The area features many notable stone walls in large part because of its proximity to what Thorson calls “the geological and agricultural center of interior New England,” which provided abundant stones of the perfect size and shape to make them. Thorson notes in “Exploring Stone Walls,” his 2005 field guide, that January is one of the best times in southern New England for stone wall viewing. “Like a negative to a photograph,” he writes, “walls are most visible when life is most invisible. Typically this occurs in January when snow frames the wall from bottom to top and when the strengthening, crystal-clear sun casts strong shadows.”

As we toured the walls, I learned their story: It begins with glaciers during the last ice age, meanders through the Colonial and early New England farming eras, ebbs during industrialization in America as the walls were abandoned and fell into disrepair, and continues today with their memorialization in poetry and refurbishment.

The origins of New England’s wall stones date back to between about 30,000 and 15,000 years ago, when the Laurentide ice sheet — a remnant of which still exists in the Barnes Ice Cap on central Baffin Island — made its way southward from central Canada and then began retreating. “It stripped away the last of the ancient soils,” writes Thorson in “Stone by Stone,” “scouring the land down to its bedrock, lifting up billions of stone slabs and scattering them across the region.”

As the ice sheet melted and receded, it left behind deposits of unsorted material ranging in size from clay to massive boulders chiseled from the slate, schist, granite and gneiss bedrock of northern New England and Canada. The bucolic rolling hills and meadows of New England are formed of rich glacial soil called lodgment till — up to 60 meters thick — that was “almost single-handedly responsible for the success of the agricultural economy in New England,” Thorson says. A thinner, looser layer of rocks and sand called ablation, or “melt out,” till was left above the lodgment till. Most stone walls are composed of stones from melt-out till, which were “abundant, large, angular and easy to carry,” Thorson says, compared to the smaller, more rounded stones from the deeper lodgment till.

Although New England’s stone walls are popularly associated with the Colonial era, there weren’t actually many rocks lying around in the soil at that time. As evidence, Thorson cites Swedish botanist Peter Kalm, who toured New England in the mid-1700s. In his “Travels in North America,” Kalm observed of its forest soils, “[T]he Europeans coming to America found a rich, fine soil before them, lying loose between the trees as the best in a garden. They had nothing to do but to cut down the wood, put it up in heaps, and to clear the dead leaves away.”

Likewise, Colonial-era books on farming, encyclopedias and recorded observations do not mention stone walls, Thorson notes. Instead of stone walls, Colonial farmers used rail and zig-zag fences made of wood — far more abundant at the time than stone — to pen animals. It wasn’t until the latter half of the 18th century that early stone walls were first widely constructed in New England. Even then, other than in long-farmed interior areas such as Concord, Mass., the stone was typically quarried or taken from slopes rather than from fields.

The region’s stones lay deep in the ground, buried under thousands of years’ worth of rich composted soil and old-growth forests, just waiting to be freed by pioneers clear-cutting New England’s forests — a process that reached its peak across most of New England between 1830 and 1880. 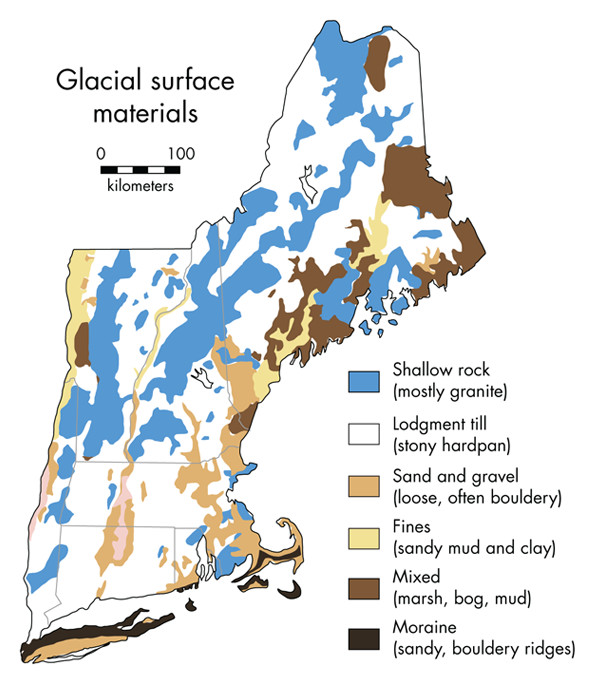 Heating an average-sized New England farmhouse during the late 18th and early 19th centuries — which coincided with the waning years of the “Little Ice Age,” the unusually cool climatic period that lasted from the mid-1300s to the mid-1800s — required burning up to 35 cords of cut wood a year. Considering that one cord is 3.6 cubic meters of wood, it is easy to understand why New England’s cold winters, along with the construction of all those farm buildings, meant the demise of vast swaths of forest.

Widespread deforestation exposed New England’s soils to winter cold — scientists estimate winter was 1 to 1.5 degrees Celsius colder on average during the Little Ice Age than it is today — causing them to freeze deeper than they had before. This accelerated frost-heaving, and gradually lifted billions of stones up through the layers of soil toward the surface.

These stones weren’t conducive to farming, so, aided by their oxen, farmers hauled the stones to the outer edges of pastures and tillage lands, typically unceremoniously dumping them in piles that delineated their fields from the forest. (Some of these so-called “dumped walls” would later be relaid more intentionally when improved tools and equipment made rebuilding easier.) In the early days, artistry in stone wall building had to wait. The first priority was survival, which meant clearing land to grow crops and raise livestock.

At Harvard Forest — a 1,500-hectare forest laboratory and classroom established by Harvard University in 1907 in Petersham, Mass. — a series of dioramas in the Fisher Museum chronicles the landscape history of New England by depicting the changes on a single plot of land since the Colonial era. European settlement, and the beginning of deforestation, largely occurred in the 18th century. By the mid-19th century, 60 to 80 percent of the land had been cleared. After farming began to decline, abandoned pastures and fields rapidly developed into white pine forests, which obscured the stone walls. The pines were logged and succeeded by the mixed hardwoods seen today. Credit: photos by John Green, courtesy of Harvard Forest, Harvard University.

The types of stones and their abundance may have been familiar to those early farmers, who were mainly from the British Isles, Thorson says, because rock in New England is similar to rock in England and Scotland. England and New England have similar natural landscapes because both lands have a similar geologic history. Millions of years ago, England and New England were formed within the same mountain range near the center of Pangaea. So, he says, “the similar fieldstones on opposite sides of the Atlantic were created practically within the same foundry.”

But there was one important difference between these New World and Old World stones: Britain had long been deforested, with its subterranean stones brought to the surface, so its stone walls had been constructed hundreds, if not thousands, of years earlier.

Although the oldest documented stone wall in New England dates to 1607 — made by English settlers of the Virginia Company along the estuary of the Kennebec River north of Portland, Maine — most of the region’s stone walls were built in the Revolutionary period between 1775 and 1825, a period that Thorson calls “the golden age of stone wall building.” By then, the effects of deforestation on the soil were being fully felt; established farms were churning up tons of stones that had to be removed. Simultaneously, a post-Revolutionary War baby boom provided an abundance of young hands to help move them.

During this period, thousands of stone walls were built and thousands more were improved. Thorson writes in “Stone by Stone” that “farmers throughout the region began to look inward at their farms, not as safe havens from war, but out of pride in being American.” Their pride was reflected in the way they painstakingly refashioned the piles of stone and primitive dumped walls along their property lines into the now classical “double walls,” parallel rows of stone filled in with small stones (see sidebar, page 34).

Constructing the walls was labor intensive. For comparison, modern masons typically lay about 6 meters of stone wall per day, Thorson says. He estimates that 40 million “man days” of labor would have been required to build the more than 380,000 kilometers of stone walls in New England — enough to build a wall from Earth to the moon — reported by an 1871 fencing census. “This is an awesome amount of manual labor,” he says, “but it is trivial when compared to the much larger effort of getting stones to the edges of the fields in the first place. That job usually had been done stone by stone, and load by load, by the previous generation.”

Over a couple of generations, New England’s vast stone wall network was erected, and by the 1830s to 1840s, farms were also well established and farmers were no longer clearing as much land, said Christie Higginbottom, a research historian at Old Sturbridge Village, in the documentary “Passages of Time.” Old Sturbridge Village is a living museum of 1830s rural New England life located in Sturbridge, Mass.

As the 19th century progressed, changes in farming, in the nature of work, and in the political climate in the country all profoundly affected New England’s stone walls.

To read the rest of this fascinating history, click the button to link to the original piece.